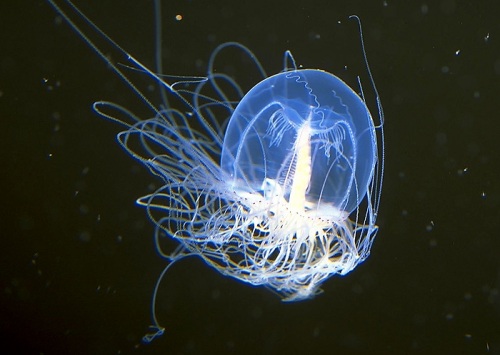 Turritopsis Nutricula is anything but a quitter. This little jellyfish is the only animal we know to be immortal. It spends its infant stage as a polyp then becomes a sexually mature medusa. But unlike other jellies, after it reproduces it refuses to die and instead returns back to the polyp stage through a process called transdifferentiation. This cycle can continue indefinitely; however, the animal can still succumb to disease or being eaten. I like its scientific name too.. it makes me think of a vampire triceratops (which may be my new favorite hybrid animal).

One of my little bunnies, Squirrel, is in the animal hospital tonight and I miss her dearly. If she makes it out I must remember to teach her this transdifferentiation thingamajig.

I love these little hijackers, especially when they’re running away on their tentacles. Apparently this video is the first documentation of octopodes using tools. I can’t wait until they unite with orangutans and crows to take over the world.